“Is this some kind of joke?” – BGU Present an Evening of Stand-Up Comedy with Tribute Artist Lee Lard 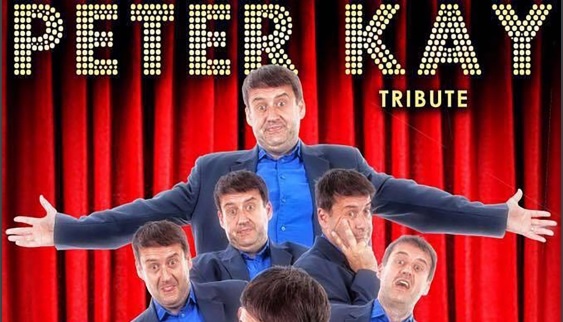 Join us at 7.30pm on Thursday 17 May for an evening of comedy as the one and only Peter Kay Tribute Act – Lee Lard – performs in The Venue at Bishop Grosseteste University (BGU).

Now in his 10th year and with over 2500 performances under his belt, Lee Lard is still being voted the most popular comedy tribute act in the UK. His outstanding tribute to Bolton’s funny man Peter Kay has been enjoyed by thousands of fans throughout the UK and abroad and is as popular now as ever continuing to sell out wherever he goes!

With a show packed full of Kay highlights from ‘Phoenix Nights’ to ‘Max and Paddy’ and beyond, Lee appeals to an audience of all ages, delivering his own hilarious ‘Peter Kay’ style of stand-up comedy.

Lee started as a comic back in 1993, going pro in 2000, making his name in the early days as a part of comedy duo ‘Lean & Lard’. After being invited to work alongside Peter Kay on the biggest comic relief video ever in March 2005 this new career was born!

You can find more information on the all the exciting events coming up at the Venue throughout the year here.

Celebrating Frankenstein’s anniversary at The Venue

Bishop Grosseteste University (BGU) is excited to be hosting Chief Constable Mike Cunningham, CEO of the College of Policing, as…

BGU kick off the Festive Season with a Christmas Extravaganza

Michael Jackson Tribute Promises a Thriller at The Venue

On 30 and 31 July, Bishop Grosseteste University (BGU) will host the triennial conference of the Burney Society (UK), which…

Films by Lincolnshire pupils hit the big screen at The Venue

The 42nd Implicit Religion Conference will be held at BGU from 17th – 19th of May. Scholars will gather from…

Dementia-Friendly Movie at The Venue

Oscar-winning actor and Game of Thrones star Jim Broadbent returned to Bishop Grosseteste University (BGU) in Lincoln this July. The…

Best described as ‘Shaun of the Dead’ meets ‘La La Land’, ‘Anna and the Apocalypse’ is the Zombie Christmas Musical…

Open Seminar to Explore the Health Benefits of Virtual Reality

Best described as ‘Shaun of the Dead’ meets ‘La La Land’, ‘Anna and the Apocalypse’ is the Zombie Christmas Musical......

BGU kick off the Festive Season with a Christmas Extravaganza

The festive season kicked into full gear at Bishop Grosseteste University (BGU) last weekend as the University held its first......

The works of William Blake have been providing artists and academics with inspiration for centuries. Dieter Löchle’s productive discourse with......

Author and Historian, Tracy Borman, will be visiting BGU next May to give a talk on the final instalment of......

Professor Nicholas Canny proposes to set the seventeenth century English Puritan migration to Massachusetts in a wider context than is......

We are delighted to welcome Lesley Smith back to BGU, to give her talk on Sex and the Tudors. This......

Bishop Grosseteste University are excited to announce Stephen Bailey will be joining us on Wednesday 11th December 2019 at 7pm......

You are invited to join BGU Staff and Students for their Annual Carol Service in the spectacular surroundings of St......

Following our sell-out Christmas Extravaganza last year, we’re back again! Meet Santa in his Grotto! Receive a gift from Santa......

BGU and BG Lincoln Ltd are offering BGU students* to be trained up on the basic skills of being a......

Our Alumni Association, BG Generations, ensures that even when you end your studies with us, you’ll always be part of......