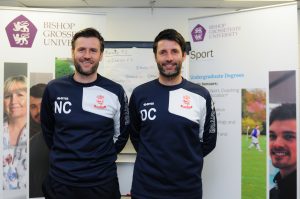 Lincoln City FC are enjoying one of their most incredible seasons in living memory, and the long-standing sponsorship deal with Bishop Grosseteste University (BGU) is proving beneficial according to Imps manager Danny Cowley.

Danny and his assistant (brother Nicky) have guided the Imps to the top of the National League and are within touching distance of taking them back into the Football League for the first time in six years.

They have also beaten a host of big-name clubs in Ipswich, Brighton and Premier League Burnley on their way to becoming the first non-league team in 103 years to reach the quarter-finals of the FA Cup.

As they look forward to a once-in-a-lifetime fixture at Premier League giants Arsenal, we sat down with the Cowley brothers to talk about the relationship they enjoy with BGU.

Danny said, “We are really thankful for BGU and their partnership – it was already formed (when we arrived at the club) so we built on that. There are some great people coming out of the university, some young, hardworking people who we can build relationships with that can help this club moving forward.”

The relationship between BGU and Lincoln City has provided a whole host of mutually beneficial opportunities on both sides, with Lincoln’s first team squad regular visitors to the BGU campus this season to train and use the facilities.

BGU sports students have had the fantastic opportunity to be taught by Danny Cowley – something which clearly meant a lot to the City manager. Until recently, both Danny and Nicky were full-time PE teachers while working part-time in non-league management.

“We’ve been in and led a couple of lectures” Danny said. “Coming from a teaching background like we have it’s been great to be able to keep our hand in. Also it’s a great opportunity for us to give something back, which is important for us.

“It’s a profession that’s very close to our hearts and the opportunity to go back and speak to young, aspiring teachers and tell them what a great profession it is has been something that we’ve obviously enjoyed.”

Not only have Danny’s lectures provided BGU students with the invaluable opportunity to gain insight from a rising star in football coaching, but they have also proven beneficial for the Imps manager himself.

“It was nice to speak to them and listen to their ideas. We are respectful that we went to university about twenty years ago now and things move on so you always want young people around you. You want to learn from them and learn new techniques and methods.” said Cowley.

“They came to watch us and observe how we do things but we wanted to pick their brains and try and learn from them! The one thing that education has taught me is that it is always a two way thing – even when we are teaching we always learn from your students.”

Have you been inspired by Danny and Nicky Cowley and the incredible success of the Imps this season? Find out how you could follow in their footsteps with our new Sport, Coaching and Physical Education degree.

Staff and students from Bishop Grosseteste University (BGU) in Lincoln raised money for charities at events over the festive period.

This year Bishop Grosseteste University (BGU) in Lincoln takes part in the national festival for the Humanities, Being Human 2017,…

Lecturers from Bishop Grosseteste University (BGU) in Lincoln spoke at a new TEDx event in October.

A BGU Drama in the Community student recently organised an activity day with forty young carers from across Lincolnshire.