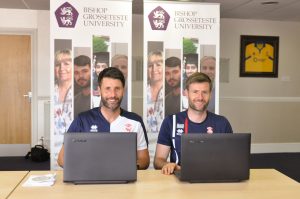 Two laptops provided by Bishop Grosseteste University (BGU) are helping Lincoln City’s Danny and Nicky Cowley in their bid to gain promotion back to the Football League.

The Imps are flying high in the National League this season and have become the first non-league team in 103 years to reach the quarter-finals of the FA Cup. Danny and his assistant (brother Nicky) have been using powerful coaching tools to help gain an edge on their opposition, and laptops provided by BGU have helped them.

The laptops were provided to the Imps as part of BGU’s ongoing partnership with the club. At the start of the three-year sponsorship deal signed in 2016 various links were explored and the laptops were part of a conversation about academic and leadership development both at the club but also at BGU.

Graham Basten, Head of School of Social Sciences at BGU, said, “I’m really delighted that our training facilities and IT support have contributed to the club’s ongoing success”

Lincoln City’s assistant manager Nick Cowley said, “(BGU) were great in providing us both with laptops and we use an app called Hudl which all our players have too. It’s used to go over our previous match.

“The laptops which BGU have provided have given us the opportunity to look at thorough detail not only on our own performance but that of teams we are due to play against.”

Hudl is an American company and their technology allows the Cowley brothers to upload clips and make annotations with specific instructions for each individual player. The brothers are both former PE teachers and the software has allowed them to get back to their teaching roots and set homework for the Imps players.

Nicky explains, “We are able to see how much time they spend on (the app) as well. Sometimes they have a little extra work to do as we send a lot of clips of the opponents we’re about to play for our players to look at.”

Have you been inspired by Danny and Nicky Cowley and the incredible success of the Imps this season? Find out how you could follow in their footsteps with our new Sport, Coaching and Physical Education degree.

This year Bishop Grosseteste University (BGU) in Lincoln takes part in the national festival for the Humanities, Being Human 2017,…

Link between Lincoln City and university burgeoning thanks to Cowley brothers

Bishop Grosseteste University is excited to announce the launch of a new BA (Hons) Military History degree. The course launched......

Artwork by Dr John Rimmer, Senior Lecturer in Secondary PGCE Art at Bishop Grosseteste University (BGU) has been included in......

PGCE Secondary Religious Education students from Bishop Grosseteste University (BGU) took their learning outside of the classroom spending a day visiting local Jews and Muslims at their......